Progression of Safety Program in Louisiana

When the new school exploded in 1937, in New London, Texas killing over 500 teachers and students it rocked the nation. The cause of the accident was determined to be a leaking natural gas distribution service line in the recently built school. The school was receiving unodorized gas from some nearby gas wells. The entire school had no warning because you can not smell natural gas in it's raw state. This led the nation to take a hard look at pipeline safety and primarily the aspect of adding odorant to natural gas, and so began the initiative for comprehensive pipeline safety programs in the nation. 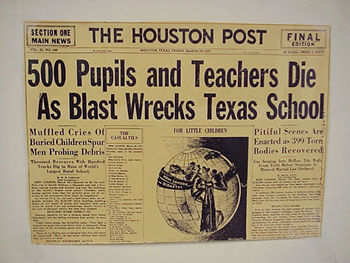 On March 4, 1965, a 24-inch natural gas pipeline owned by Tennessee Gas Pipeline ruptured near Natchitoches, Louisiana killing 17 people. This accident is said to be responsible for the enactment of the 1968 Natural Gas Pipeline Safety Act. This accident, described by the Federal Power Commission, was the worst pipeline accident since 1950.

In 1972, the Federal Department of Transportation prescribed a "Model State Gas Pipeline Safety Act" to allow for the authorization of States to adopt safety standards for the transportation of natural and other gas by pipeline. The original program in Louisiana was to be implemented by the Public Service Commission, however the job of establishing a Pipeline Safety program in Louisiana fell upon the Department of Natural Resources in 1974.

When the initial safety program started, the State only had jurisdiction over a small number of intrastate natural gas transmission and distribution companies. The regulatory requirements were basically the same as provided under the Federal CFR 49 Part 191 and 192. The State program received jurisdiction of the municipal owned systems from the Federal government around the mid 1980s. The State legislature passed Act 22 and Act 250 in the late 1980s to give the state authority over master meter systems and schools. At the same time, Pipeline Safety was granted authority to collect a user fee from each jurisdictional pipeline operator. Also, during the 1987 legislative session, the State received authority to develop a hazardous liquids pipeline program. Both the natural gas and hazardous liquids programs are certified under the Federal grant and certfication agreements.

In the early 1990s, the Federal DOT passed and promulgated rules for drug testing of pipeline personnel performing operations, maintenance and emergency response functions on pipelines. This was known as Part 199 and is a part of the State's regulatory jurisdiction over our intrastate operators. In 1994, Alcohol testing was added to Part 199 for the same personnel.