The Gas Distribution program has been in existence since the inception of the Pipeline Safety program in the early 1970s. It has grown to incorporate municipal owned and parish owned local gas distribution systems. It regulates the gas distribution facilities for 15 private companies, as well as, almost 100 political subdivisions and incorporates approximately 39,000 miles of jurisdictional piping.

Our master meter program was merged into our distribution program to establish a consistent inspection practice because of the fact all master meter systems basically have to comply with the same requirements as distribution operators. The majority of the master meter operators under Pipeline Safety jurisdiction are comprised of private schools, state owned facilities like hospitals, prisons, DOTD district offices and other State owned complexes, housing authorities, and parish school systems. 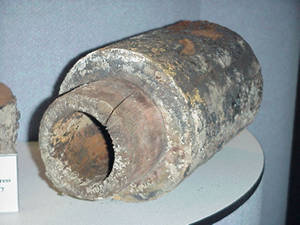 Cypress distribution mainline piping used in New Orleans
at the turn of the century.