Many critical issues face the future development of oil and gas development in the OCS, particularly if the full potential of the OCS is to ever be realized, many of which are mentioned below.

Natural gas is touted as the fuel of the future. Current demand for natural gas is 22 trillion cubic feet per year. The National Petroleum Council projection for 2010, just ten years away is for a demand of 30 trillion cubic feet. Where is all of this gas going to come from? Natural gas is a wonderful fuel, feedstock, and energy source, but it has to be produced from somewhere. The OCS is looked to as a key component of the supply source, but action is needed if the OCS is to supply its proportionate share of this future supply. Something has to be done to reverse the current decline rate. Deep water slope production is not adding to the production base as quickly as the shelf production is declining.

Nationwide, drilling has increased significantly over the past seven years, but gas deliverability is not keeping up with demand for gas. As Figure 1 shows, between 1993 and 2000, the number of gas wells drilled in the U.S. has increased more than 50% from about 10,000 per year to 15,000, but average daily natural gas production has grown by only a little over 10% from about 61 billion cubic feet per day to 67.5 billion cubic feet per day. 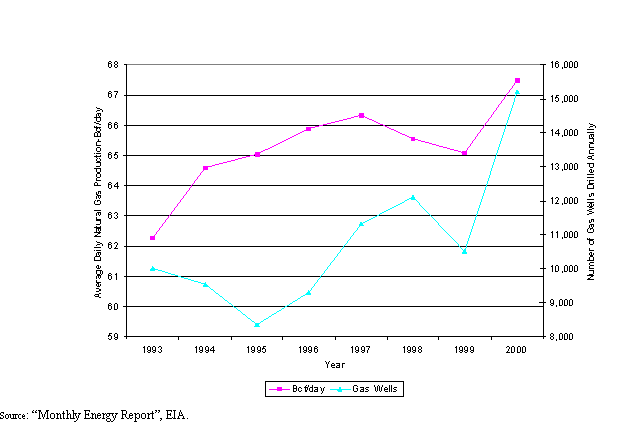 For the full potential of the OCS to be contemplated, all areas of the OCS must be opened up to exploration and production. The U.S. cannot pretend to have a comprehensive OCS development policy when most of the coastal waters of the U.S. are off limits to exploration. The Louisiana OCS territory is the most extensively developed and matured OCS territory in the U.S. Louisiana OCS territory has produced 88.1% of the 12.8 billion barrels of crude oil and condensate and 82.9% of the 139 trillion cubic feet of natural gas extracted from all OCS territories from the beginning of time through the end of 2000. But, Louisiana OCS gas production peaked at 4.16 trillion cubic feet in 1979 and was at 4.1 trillion cubic feet in 2000. It is illogical to continue to base the future OCS contribution to the nation's energy supply almost entirely on production in the central and western areas of the Gulf of Mexico, while keeping the eastern Gulf, the entire Atlantic coast, and the Pacific Coast off limits to future exploration and development.

Not only is the Louisiana (Central Gulf) a mature producing area, but the infrasturcture is aging and in need of attention. The offshore and onshore pipeline infrasturcture is old, with some or it deteriorating. There is a need to expand the capacity of pipelines to handle hoped for increases in production volumes of oil and gas. The onshore support infrastructure is in need of substantial improvement and modernization.

To fully develop the OCS potential, we must develop the deep reservoirs. Shallow deposits have been widely exploited; whereas the deep deposits have gone almost untouched. An immense resource base lies at subsurface depths of 20,000 feet or more as shown in Figure 2. 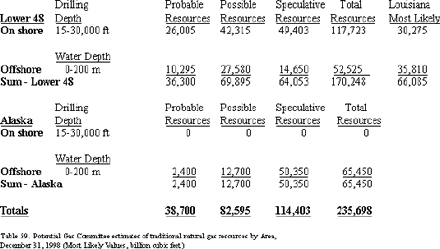 To tap this vast deep resource base, we need to be drilling something in the range of 300 wells per year below 20,000 feet rather than the current 30 shown in Figure 3.

Figure 3
Deep Drilling in the U.S. and in Louisiana 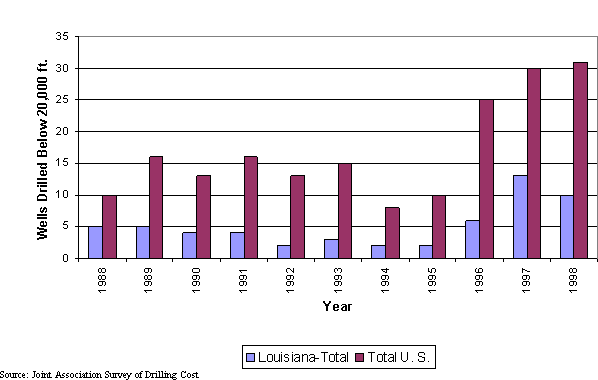 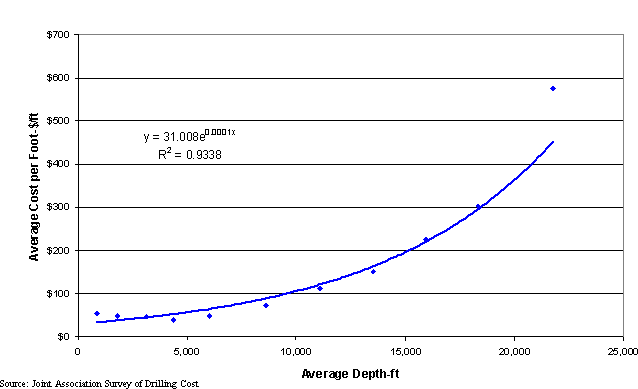 To counteract this extremely high cost, MMS should consider expanding the Deep Gas Initiative introduced for Central Gulf Lease Sale 178 and proposed Western Gulf Sale 180, which eliminates royalty for the first 20 billion cubic feet of gas production from leases at greater than 15,000 foot depth until a gas price trigger limit of $3.50 per million Btu's is reached. Expanding the price limit to something like $5.00 - $7.00 per million Btu's is warranted for this expensive drilling domain. It would also be high enough to get some attention in times like today when the spot market price of gas is well above $3.50.

The unconventional gas incentives for coal bed methane and tight sands gas production is an excellent precedent for establishing a deep gas incentive for onshore and offshore drilling. The 1979 Section 29 Federal Tax Credit bill generated a $60 billion investment in the recovery of coal bed methane.

Development of new technology and greater penetration of existing state of the art technology in the field is needed to fully develop the potential of the OCS. Some of this new technology that is still expanding its application and capabilities include:

Finally, but not least important, addressing environmental impacts and perceptions of offshore development on onshore ecosystems and life needs to be adequately addressed by placing more attention and funding for impact assessment and amelioration.